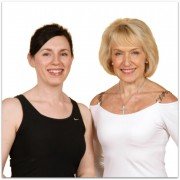 Northamptonshire fitness instructor Tracey Amis is going it alone after the collapse of a national business.

The Rosemary Conley Food and Fitness company went into administration in February, putting the livelihood of its 121 franchisees at risk. Among those left in limbo was Tracey Amis, who had operated a successful franchise in the Wellingborough & Rushden area for two years.

Tracey had been unaware the company, which had been in existence for 40 years, was in financial trouble. She said, “I had no idea until I opened an email saying it was going into administration. I thought my business was finished there and then – I didn’t really understand the process going forward.”

After weeks of uncertainty, the franchisees were released from their contracts with Rosemary Conley in April. It has given Tracey the freedom to continue holding her nine weekly classes and running her business on her own terms. She has been able to offer a wider range of membership options and with more competitive pricing.

She said, “I feel like the constraint of the contract is now free. I can run it how I want to, which is a massive relief. It is not just a diet club – it’s about seeing lives changed for the better. I know that I can work effectively with individuals who want to use food and nutrition to improve their health and well being.”

Tracey, who lives in Higham Ferrers, has re-branded her business as Slim & Fit Classes. She said, “My classes are suitable for everyone, I now offer a greater flexibility in membership and discounted rates for senior citizens and students. My clients have been loyal to me and I’m happy now going forward.”

Slim & Fit Classes aim to give you all the support you need to reach your weight loss goal by sharing ideas, tips and guidance on how to shed those unwanted pounds.